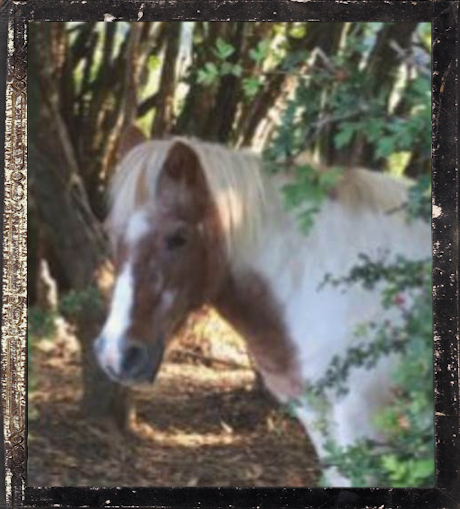 Kerry was found in a neighbouring dairy farm. Bought for the farmer’s children, who had no interest in ponies, the famer contacted us to buy Kerry and her foal. We had already rescued a small horse from him, so we went to look. Instead of finding them out in a field, we were taken into a cowshed. The cows were all tied up along the wall, but we soon realized that the first two in the row weren’t cows, they were ponies! Kerry’s hooves had grown so much they had turned up at the toe. Lyn’s brother, Robert, bought Kerry and her foal. As his wife at the time was Irish and their son Jeffrey was about 3 years old, the ponies were named Kerry and Kildare! Hooves trimmed, let out in a field with friends, and gently broken in, Kerry worked for many years as a super energetic little Shetland. Her hooves were always quite delicate, and in her later years, she developed laminitis, so needs to be kept away from rich grass in the summer time.

What's special?
When we first saw Kerry tied up in the cowshed, next to her trying hard to bounce around on the end of a rope was her 11-month-old foal, who we named Kildare! They had been taken in for the winter just like the cows, and tied up through early spring when we found them. They spent all their Belle Ferme life together. Unfortunately, the foal Kildare had to be put down due to severe kidney problems. This was a very hard moment, as Kerry stayed near her to the last moment. She then spent several days at the field gate or wandering around visibly looking for her.