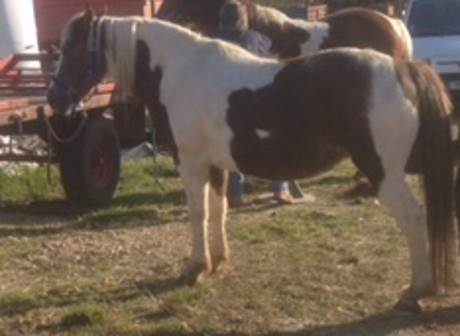 Apache was bought at the age of around 6 years. He was at a neighbouring farm, along with Shetlands Kerry and Kildare. He was extremely afraid of everything. He was quite impossible to catch, and it took weeks before we could get near him. It took a few more weeks to get the saddle on his back, not to mention the time it took to get the bridle on, as he didn’t want his ears to be touched. Once he could be ridden, he was lovely, although very sensitive. With the right rider he was brave and confident and competed in jumping for quite a few years. If the rider wasn’t very confident, then he would get quite stressed, although never naughty. To feel safe he would find his best friend in a lesson and stick behind him. Luckily his friends were true friends and never seemed to mind Apache sticking to them like glue!

What's special?
At one point we sold Apache to a Belle Ferme rider. He became lame due to a problem in the hock of his hind leg. After vet visits, it was decided he would never recover properly, and so should be put down. Understanding that he did have a problem, but not agreeing that it justified him being put down, we bought him back, and turned him out in the field to rest for several months. After that, he came back home and got back to work, where he earned his living for many more years, until finally being rewarded with his well- earned retirement.