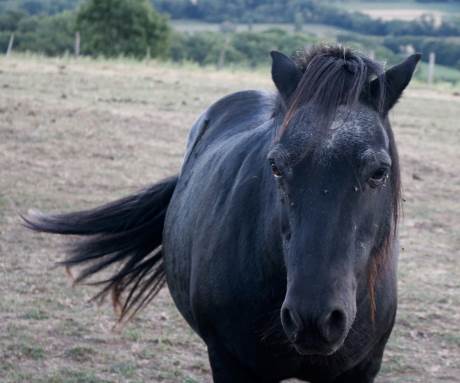 Looping came from near Dijon. He was really not in very nice state when we first saw him. His coat was full of scabs and he didn’t look very healthy, however, he jumped incredibly well. Once home, he soon looked better and his coat became shiny. He did turn out to be a super jumping pony, competing in up to 80 cm courses, which is quite high when you are only 114 cm tall! As he grew older, Looping developed breathing difficulties when eating dry hay, so his diet has to be watched.

What's special?
Looping gets very attached to his friends! So much so, that he would insist in following Mona up from the field even if he wasn’t working. He would then untie himself and trot into the manège calling for her, then would want to spend the lesson trotting round next to her like a foal with its mother. Sometimes he would choose a different friend, but he has to be very near whoever his friend is!